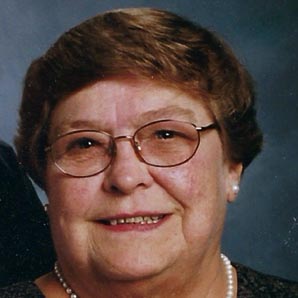 There were three seminal stories around death and dying that made a huge impact on me many years ago. These accounts haunted me, changed me … and instilled in me a thirst and a quest to learn better how to honour the process of dying; something I felt our western culture wasn’t succeeding at.

The first story was told to me by my uncle’s second wife. Sadly, her grandson was diagnosed with terminal kidney cancer when he was 16 years old. She was able to be with him the last two weeks of his life, in the hospital. She told me she would bring him McDonald’s hamburgers, they would play cribbage a lot, watch TV together. And at one point, he was clearly very worried, very concerned, when he tentatively asked his grandmother what she thought might happen to him when he died. I winced as she triumphantly told me that at that point, she quickly grabbed the cards, dealt them out, and successfully diverted the conversation. I understood why she did it: back in those days, death wasn’t really talked about. She didn’t know any better, and to her mind she’d managed to distract her grandson in a profoundly uncomfortable and painful moment. But as I listened to her account, my heart sank. That poor kid was so scared and so alone facing his death, he just wanted to talk to someone he trusted. He wanted to talk about what we ALL wonder about; I don’t know if he ever got the chance.

The second event involved my own father, who had a massive heart attack at the age of 45. He spent three days in the hospital, unconscious and on life support, before dying. Several of us family members lived at the hospital alongside him for those few days. When the time came in the middle of the night that all his vital signs were fading fast and we knew this was the end, I alone was at his bedside holding his limp hand, assuring him it was all going to be alright, that it was okay for him to go. It was befuddling to me that his siblings – my aunts and uncles who I looked to for guidance – were also in his room but hovering along the wall, away from his bed. I encouraged them to come over and touch him, talk to him, but they didn’t. In retrospect, I understood that they simply didn’t know how to handle the situation of their older brother dying, didn’t know what to do or say. None of us did. Death was something that only happened to other families, and most of us were ill-equipped when it inevitably dropped into our own world.

The third story is my friend Jennifer’s account of her grandfather – her ‘Papa’ – dying in a NYC hospital. He was very old and his beloved wife had predeceased him years before. Only one of his family members, his granddaughter Patti, could get to his bedside before he died. He was restless and agitated, he was terrified of dying. Patti loved her grandfather deeply. By now he was a frail little man, and in a very inconsolable state. She climbed into his hospital bed beside him to hold him, just as he’d held and consoled her as a little girl. She encouraged him to “Look for Nana … she’s waiting for you, she’s coming for you.” The old man cried and protested, “No, I don’t know any of these people! It’s so dark, I’m scared. I don’t want to go!” Patti kept repeating, “Watch for Nana, she’s coming to meet you.” And then, at a certain moment, her grandfather completely relaxed in her arms. He smiled peacefully and said, “Oh THERE she is!” And he died. I’ve always marveled that Patti – using blind faith and hope, I suspect – was able to help her grandfather have a good death. What an incredible gift.

And so it was that in 2013 when I learned an organization had formed in Saskatoon to help people at the end of their lives, I eagerly signed up for volunteer training. I knew from my own experience that sometimes family members are not comfortable with their loved one dying; that because of their acute pain and pending loss, they’re not able to be present for their loved one through that. I knew that sometimes it’s easier for relative strangers to help out with certain tasks and even with companionship; there is no history or baggage and they can meet simply as fellow humans. I believed that dying was one of the most profound experiences we ever have, and I hoped I could aid in any small or large way someone going through that process.

Within a few weeks of completing my volunteer training with the Prairie Hospice Society (PHS) in 2014, I was paired up with a 74-year-old woman named Carol, who had terminal cancer and was now beyond treatment. Carol was wonderful, immediately. A beautiful, classy woman who’d had a full life of sailing and curling and being a mother and travelling and being a professional medical receptionist. Tuesday afternoons became our time. For the first many months, we’d go out shopping together, or go for lunch, or go to a film matinee. I helped her with her Christmas card and shopping blitzes, took her to medical and beauty appointments, and even brought her out to the barn where my two horses were boarded. She loved being with them! By then, Carol needed a walker and oxygen tanks wherever she went, but we made it work. Shaw TV came out to the barn and did a story on Carol and me, and the PHS. Carol looked fantastic in her red leather jacket standing next to my black mare, holding onto her halter to keep her upright. When the story came out, we watched it together excitedly, and then Carol sent it around to her many friends and family. About a year into our friendship, it was simply too exhausting for Carol to go on excursions anymore. We’d play cards at her apartment, or watch movies in her living room. But a few more months into that, she could no longer walk and, after several weeks in the hospital, moved into a care home.

I continued to visit Carol weekly at Stensrud Lodge. I’d bring out her photo albums and point out her family members and the wondrous vacations she had been on. There came a point however, when she no longer recognized the people in those photos – or me. And when it seemed that my presence in her room was more alarming to her than comforting, I said ‘good-bye’ to her for the last time. She died a few weeks later, on July 16, 2017.

It was the following spring, after I’d taken a break to grieve and process Carol’s passing, that PHS contacted me about becoming a companion to another terminally ill client. Minnie was 77 years old, a fiercely independent firecracker of a woman who still lived alone in her home. We instantly connected; we had a lot in common as it turned out. Minnie and I spent seven months telling each other stories and joking together. When she felt well enough, we went on some memorable outings for lunch and shopping – I would tease Minnie that she drove that scooter at WalMart like she stole it! My husband Scott came over to Minnie’s house with me a couple times to do some fixing and repairing, and those two laughed a lot together. I was a companion to Minnie for only seven months – she died just after Christmas that year – but I am so grateful to have known her.

Both Carol and Minnie (and their family members) expressed to me how much they appreciated me being their companion. I feel truly privileged for having been able to help out in some small way. But more so, I feel honoured to have been welcomed into the lives of two extraordinary women at such a profound and special time.

The nature of being a hospice companion is an interesting one; we are not there to nurse or counsel or direct. We supply neutral friendship and support – which can be liberating for the client. In both cases, my companions wanted to explore the subject of dying and death with me; I think I was a sounding board for them when they didn’t want to burden their family with their thoughts. I saw frustration, grit, vulnerability, mischievousness, fatigue, perseverance, and joy in Carol and Minnie. Both women lived life to its fullest right up to the very end. And I feel like both of them showed me how to be accepting – and ultimately graceful – in the face of death. What a beautiful lesson.

A heartfelt “thank you” to the founders, the donors, the staff, and all the volunteers of the Prairie Hospice Society for the gift of citizen hospice care in Saskatoon. This is an essential humanitarian service, and one that I’m proud to be a part of.

Following are just a few of the many incredible stories to come out of the PHS. 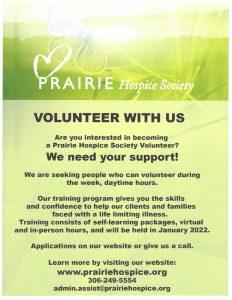 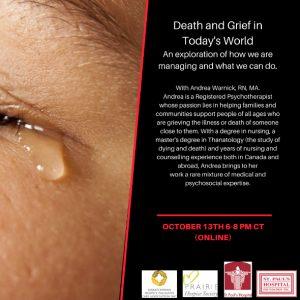 An exploration of how we are managing and what we can do.With Andrea Warnick, RN, MA. Andrea is a … END_OF_DOCUMENT_TOKEN_TO_BE_REPLACED