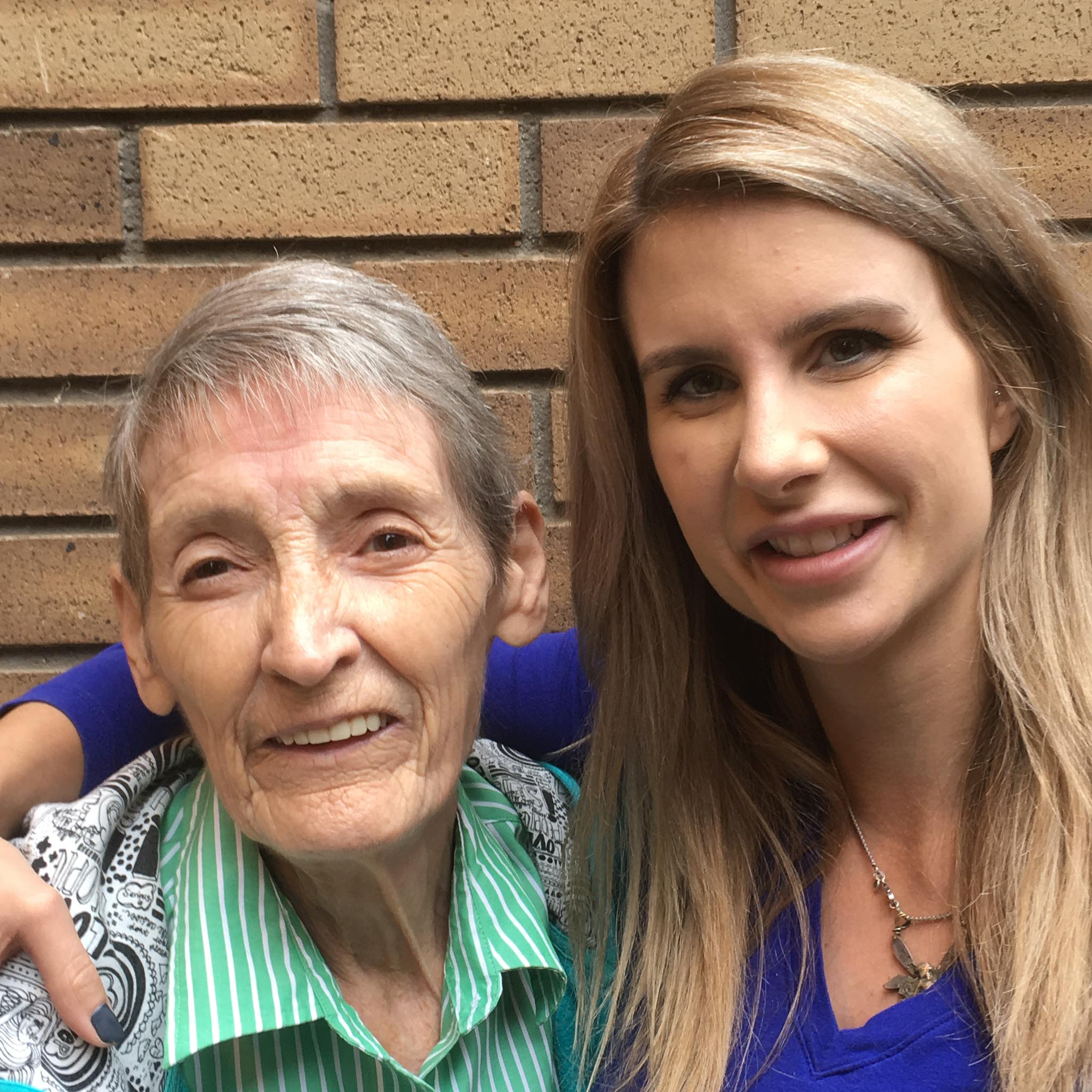 “I want it said of me by those who knew me best, that I always plucked a thistle and  planted a flower where I thought a flower would grow.”

Throughout her life, Joyce Comeault lived in a variety of different houses and worked at a variety of different jobs. One thing was a constant though: wherever she lived, she always grew a garden. She retired from housekeeping at the Northgate Inn when she was 60; by then she lived nearby in a house where the backyard was just old dirt and had been previously used to rebuild cars. She laughs, remembering, “I’d be doing something in the garden and pull out part of a brake or an old motor!” With her green thumb, she turned that forsaken ground into a lush garden full of beautiful flowers and bountiful vegetables. Enough to feed the neighbourhood – which she did. “I had so much growing there I couldn’t give it all away!” she says proudly. “I said to the neighbours, ‘Don’t destroy the plants – just ask and I’ll give it to you, you can take what you want.’ My family always told me, ‘You’re growing a garden for the neighbours!’ I said, ‘I guess so,’” she shrugs with a grin.

The gardens over the years weren’t just to feed the neighbours, they were to feed her own family – Joyce and her two children, as well as the foster children she took in. Joyce estimates she was a foster parent to at least a dozen children. “Some were outgoing,” she recalls. “But some were so sad, they didn’t seem to understand their situation. Some didn’t even know what Christmas was!” she says, eyes wide with  disbelief. “My daughter and son would get in there, and help them open their presents,”  she smiles.

Winter didn’t stop Joyce from gardening; she could garden indoors too. “At one time I  had 100 houseplants – my railings were covered in them, my bathrooms, my bedroom, I  had them everywhere! But then I moved to Winnipeg and had to give most of them  away.”

Now 71, Joyce lives alone in a subsidized seniors’ apartment building in downtown  Saskatoon. There she plants and tends flowers in the courtyard on the main floor. “I had  a bad experience last year,” she admits, frowning. “All my roses kept getting cut. I was  mad, I said, ‘They’re for everybody to enjoy.’ I think I know who it was though, she  walked around with clippers in her hand,” Joyce quips. “But now she’s moved!” she  brightens with a chuckle.

With its proximity to the river, Joyce says she is in heaven at the Shepherd Apartments;  walking is another of her loves, and she is looking forward to summer so she can get  out on her legs again.

There was a time, though, when her days of gardening and going for walks looked  numbered. In 2016, she was suffering from extreme stomach issues, and while at the hospital for testing, it was discovered she had Stage 4 colorectal cancer that had metastasized to her liver. Immediate surgery started off the process, with chemotherapy and radiation treatment following. While going through all of that, Joyce’s osteoporosis got much worse, resulting in numerous fractures in her spine. It was then that she was referred to the Prairie Hospice Society (PHS).

Joyce received much help from PHS with the Hospice Now program. There were multiple volunteers who drove her to appointments when she was in the thick of it,  needing bloodwork, CAT scans, chemo and radiation. “Oh, they helped me in any and every way possible,” Joyce says emphatically. “They helped me with just about everything. One came to my doctor’s appointment when my daughter couldn’t be there, they wrote down all the notes to give to my daughter. They helped me get my teeth done. One even bought me groceries! They’re very, very caring people. We  talked, we joked, they offered help of all kinds. They’re just fantastic people, they really  are – every one of them. The conversations were so uplifting, they made my day.”

Joyce has a few favourite anecdotes from some of those drives. There was the time  Eileen Klassen, the PHS Volunteer Coordinator, got a little lost on the way to the RUH.  “Instead we ended up in Kinsmen Park!” Joyce chuckles. “She said, ‘We’re taking the  long way around,’ and we laughed. I thought that was so cute.” And the time Gail Bissett  had to park in a spot reserved for expectant mothers. “I said, ‘Okay, which one’s pregnant – you or me?’” Joyce hoots. And she was always happy to see Jim McClements and his dog. “The dog was in the back, she was so friendly, she always gave me kisses on my cheeks,” smiles Joyce.

During this crucial time, PHS also matched Joyce with a steady volunteer companion – Rachel Drew – to come spend time with her each week.

“There is nothing more beautiful than someone who goes out of their way to make life  beautiful for others.”

Ever since she was a little girl, Rachel Drew had an unusual predilection. Her family all  knew of it, even though her siblings didn’t share it. “For some reason, since I was little  I’ve always been really mindful of death,” she says thoughtfully. “I think it’s one of the  most important times in our life. It’s so valuable to be able to live that part of your life  well.”

By the time she was in high school Rachel was meditating regularly – again a  divergence from what her classmates and peers were doing. After completing school,  she travelled extensively in southeast Asia. One highlight for her was spending 10 days  in a meditation retreat in Thailand. “Also I stayed at a Buddhist monastery in Nepal for a  month. In Nepal, you meditate on the dying process. I’m not Buddhist but I like the  traditions, and am pretty aligned with the philosophies behind it.”

Once back in Saskatoon, Rachel was considering what her future career might be.  “Given my passion for helping people die well, I thought I might want to be a palliative  care nurse,” she says. So she volunteered at the Palliative Care Unit in St. Paul’s  Hospital. “But I realized that it was the connection with people at the end of life that I  wanted. I want to make sure people have the opportunity to still live.”

Rachel went on to get married and have two daughters. She started up her own  business in the Occupational Health and Safety field. Then in 2016, she became a  volunteer with the Prairie Hospice Society. Upon completing her training, she was  matched up with Joyce Comeault.

“I remember at first I was apprehensive when I saw that Joyce was a similar age to my  mom,” says Rachel. “My mom had passed away two years before that, and I was still a  little sensitive. When I first started seeing Joyce, she was going through chemo, then to

Once Joyce was convalescing back at home again, Rachel made soups for her, and  helped clean up around the apartment. And there were two or three incidents where  Joyce needed to call Rachel to take her to Emergency; of course Rachel was quick to  oblige. “I’m always happy to know she can phone me if she needs anything,” says  Rachel.

“And in the end it’s not the years in your life that count; it’s the life in your years.”

In the three years that Joyce and Rachel have now been a team, they have forged a  close bond. The two women see each other once a week, and talk on the phone during  the week. “It’s just been amazing,” says Rachel. “We always joke that it’s been the  perfect match. We get along so well, it feels like we’ve been friends forever. And,” she  adds, “we actually do connect a lot like mother and daughter.” Indeed Joyce refers to  Rachel as her daughter, and Rachel’s kids – now 5 and 7 – as her grandchildren.

“She has such a sweet relationship with my daughters,” Rachel smiles. “I take the girls  to see her every couple of months for sure,” says Rachel. “Plus on special occasions  like if they’re trick or treating, or at Christmas I’ll bring them to help decorate Joyce’s  tree. I know Joyce just loves it, she always has craft stuff to do with them at her place – she connects so well with them. Last weekend the girls asked if we could have her over  for a tea party. The girls made muffins with their dad’s help, and when Joyce got here  they showed her around the house, showed her all their toys.”

These days, Joyce is feeling better; she’s gone from 67 pounds at her lowest, to 88  pounds so far. She says she is looking forward to getting out this spring with Rachel and  the girls to pick out flowers and do some planting, to go on river walks; it’s clear she  cherishes exercise and fresh air, and her time with what she calls her “second family”.

“I want Joyce to feel that she’s a part of my family,” says Rachel. “And she is so much  more – she has such a special place in my heart. She does just as much for me as I do  for her, it’s such a reciprocal relationship … it’s very rewarding.”

Rachel is thoughtful for a moment. “There’s still so much value in that end of life time,”  she nods, and then ventures: “Possibly the most value.” 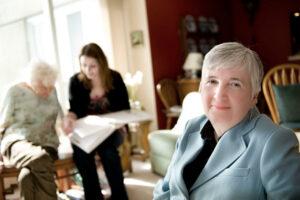 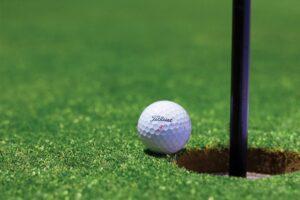 We are excited to share the Registration form for this year's event. Registration is due August … END_OF_DOCUMENT_TOKEN_TO_BE_REPLACED 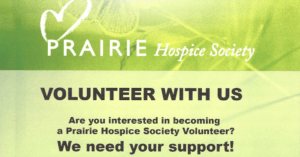