Having lived in the town of Nokomis for 47 years, Marilyn Steve-Zorn never expected to move to the city. In Nokomis, she had a lovely two-storey home, a huge garden with mature fruit trees on a triple lot, lifelong friends. But in 2013, her husband David was diagnosed with kidney cancer. “And he was only born with one kidney to begin with,” says Marilyn. Despite two years of treatment every six weeks in Humboldt, the cancer spread to his bladder. And in June of 2015, David had his only kidney removed. The couple immediately sold or gave away everything in Nokomis and moved to an apartment in Saskatoon; David now needed dialysis three times a week to survive.

Unfortunately, there was more going on with David’s health. The cancer was also in his shoulder and lung, plus he had a heart condition. Chemotherapy and radiation treatments were not an option, in order to focus on dialysis. It was then that David’s doctor suggested the couple might benefit from the help of Prairie Hospice Society (PHS). While the couple didn’t need a companion, they were new to the city and unsure of driving – to appointments, to run errands, to the Dialysis Unit. They were soon accepted in the Hospice Now program.

David and Marilyn were given rides by several different volunteers of PHS. “There was Jim McClements, he’d been a Professor of PhysEd at the U of S,” says Marilyn. “Turns out my son had him as a teacher when he was at university! One volunteer had a daughter in a wheelchair so she came in a van with a ramp. You know, you get to meet different people. We were so thankful for hospice help. And Larry was another one that we got to know, he’s taken me to a couple appointments since David passed away.”

But the PHS volunteer they saw the most was Gail Bissett. “She was just excellent, it was unreal,” states Marilyn. “We learned a lot about each other. And you know, she always had that hearty laugh! She always had to give both David and me a hug when she saw us. She was just one in a million, we really liked her.” To show her appreciation, Marilyn enjoyed giving homemade gifts to Gail: fridge pickles, carrot marmalade, Norwegian cookies, knitted towels and washcloths. Because of her training as a nurse, Gail was welcomed by the couple to sit in on sessions at the Cancer Clinic as well. “She could help us better when she knew what all was going on, and where things were at with David’s health,” explains Marilyn.

Everything came to a head one week in July, 2018. “David had gone into the hospital on June 30th,” says Marilyn. “This time, the doctors said he wouldn’t be coming out again. They stopped doing dialysis on Monday because they said he was in the early stages of passing away. On Wednesday I had an appointment with my heart specialist, I had waited a whole year for it. Gail took me there. When it was over, we got into the vehicle and were just pulling away when my phone rang. It was David’s sister at the hospital saying ‘Marilyn, come quick!’”

When they got to St. Paul’s hospital, Gail asked Marilyn if she wanted to just be dropped off or if she wanted Gail to come up to David’s room with her. Marilyn said she could come up to his room. “When we got there, he had already passed away.” Marilyn’s eyes well up with tears. “I missed him by five minutes,” she shakes her head, then removes her glasses and and wipes her eyes with a tissue. “I felt bad. I said, ‘Why did he have to pass away when I was at that appointment?’ My sister-in-law said, ‘Why would he leave if you were here with him?’ Like if I was there, maybe he would have fought more,” Marilyn explains, a little incredulous. “So maybe he had the peace to leave when I was gone, I don’t know. I’d never heard anyone say something like that before.”

This is interesting. According to the International Association for Near Death Studies:

It seems that the dying often have the ability to choose the actual moment of dying and so it is not uncommon for people to die when their loved ones are out of the room, even for the briefest of times, to spare them. It appears as if some people who are dying find it easier to let go when they are alone. Not understanding this, families often feel unnecessarily guilty under such circumstances.

Gail stayed with Marilyn and her sister-in-law that day until they were ready to leave. And then she drove them both home. Afterwards Gail gave Marilyn a book: Grief … Feeling Your Way Through. “Talking to Gail, she helped me a lot,” says Marilyn. “There was a lot I could ask her because she’d been in the nursing field. I missed her so much when she retired from volunteering. I phoned her one night recently after supper just to see how she was doing. We still keep in touch a bit.

“As far as hospice goes, Prairie Hospice Society is excellent. If it wouldn’t have been for them, I don’t know. It would have cost me a fortune for taxis. All the volunteers were caring and helpful. You couldn’t wish for any volunteer organization that would treat you better.” 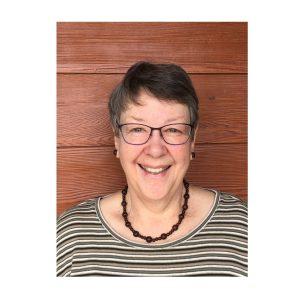 With an Open Mind, and Open Arms 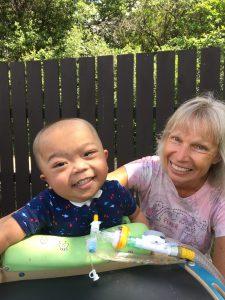 A Family of the Heart 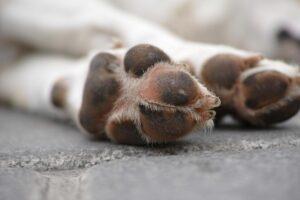